I watched the funeral earlier on Vimeo and it brought some memories which I’d like to share.

Graham showed me the ropes.. a kind of big brother figure we share the same Christian name

He nicknamed me Junior.. which I didn’t mind.

He had swagger..we would go to the roughest bars and blues clubs in Chapletown and Bradford .. never any hassle.

Fond memories of playing pool in the Hayfield .. £2.00 twists served in brown paper we were the only white faces there usually.

We shared the same taste in music

I remember going to Leeds polytechnic with Graham and I heard reggae dub for the first time.. we saw XTC.. The Police and also Brannigans Bar to watch the Revillos or The Cramps but we loved Dub and roots reggae.

Memorable gigs with the Mirror Boys include Futurama festival, Deeply Vale, and Stonehenge free festival .. a real eye opener for a middle class lad from Alwoodley!

Also we delivered 17 pianos together in a trailer to Adalucia we shared the driving and he taught me how to swap over at the wheel while we kept going.

I’d never been to Spain before.. another eye opener

We had so many adventures and good times together.. I salute you General Graham.. goodbye soul brother.

…there have been a few significant peeps on my journey, one of the first was Graham Cardy.
We first met when I was an art student at Harrogate though living at the time in Harehills Leeds.
We had had a few sorties at what was later to become the Mirror Boys with Geoff Clout and Graham’s brother Phil but it was sporadic and I don’t think any of us were taking it too seriously.
One day Graham came over I was laying in the bath admiring a cheque, my art college grant. Graham talked me into using it to finance hitchhiking to Greece where to find work picking fruit, we set off shortly after, we got as far as Italy planning to hitch down thru Czechoslovakia? (cheaper than Italy) but only to discover the Russians had invaded and borders were closed.
Running short of money and sleeping rough we ended up in Venice, the travelers tales at the time was “never buy drugs from …..” – we did and accordingly were picked up the next day by the police and escorted across the square in front of the cathedral to a small police station.
On the way I managed to drop the dope which was in a 2 oz tobacco tin on the plaza, the cops searched us and then told us we were vagrants and they would take us to the border, we were escorted back across the plaza and incredibly the tin was still laying there and I even managed to pick it back up unobserved, they put us in a car and drove us to the Swiss border.
By this time relations had become little strained we smoked the last of the dope and decided to split up.
Graham ended up in Amsterdam and I headed home where to discover my 17yr old girlfriend was pregnant with the first of what became 4 children.

The Mirror Boys played a gig at the Leeds Poly Common Room. I noticed the poster that was “Big Eyed Beans From Venus” if I remember correctly, Unfortunately I saw the poster too late so I missed the actual event. I believe they were Graham and Phil Cardy and Phil Middleton.

I had met his brother Phil Cardy, possibly through a housemate-friend Mary Gordon. Phil took me to meet his brother who lived on Leeds Road in Harrogate; I think that I expected to play the tenor sax. The guiding forces with the band were likely joint a great love of Beefheart and Zappa, and psychedelics, and mainly just showing off. We very definitely did not fetishise musical prowess. So we started rehearsing above the strip club in Harrogate where a friend had previously done an anti-strip where they started naked and then got dressed.

My brother had bought a Hofner Futurama for £1.50 which he sold to me for a fiver. Perfect, once I had paint-stripped it. Some time around then I bought the Vox AC30 that I still own. Graham had an Epiphone semi-acoustic bass with the frets removed. The drums were played by Jeff Sedgewick, or possibly Johnny Middleton. Will Jackson played more than once perhaps utilizing a gold-plated Les Paul.

We did the Leeds Fine Art Studio recordings very early on. Geoff had already recorded “The Pimps” album there with Tony Jennings and Colin Booth using two Revox A77s and a spring reverb in the Leeds Poly Fine Art sound studio. He had copied the studio keys so he could get in any time.

The first gig with the Geoff was probably the Crown Hotel. The Plugs were pulled! The first half a dozen gigs we played had the PA turned off and/or Graham had a fight with someone in authority. We rehearsed at Nidd village Hall and played there too, obviously. It was 1975; it would be only a year until the Pistols at Fforde made me at least feel quite “mature”, ironically.

We were really in fine form when Graham, possibly in tandem with John Keenan, put us on at the Poly Common Room, probably late 1975 (I need to look it up). I think the lineup was Phil Cardy and Sylvie Slade dancing, Graham on bass, Phil Middleton, Geoff Clout, Graham on vocals, Wendy Freeman on baritone sax, Charlie Daykin on keyboards, Mike Bongos Holdom on congas, and Rosario on drums.

We were the support. We had no idea what the main band would be like. Rosario lent his floor tom to their drummer (Palmolive) who beat a dent into the skin. I think that Mike was offered to play with them. But as the main band were The Slits who were approximately 1000 times better than us…well they are as fine a band as has ever been!

I know we played Roots/International/Cosmo in Chapeltown many times. I remember how the place filled up with women for the last half an hour. By that time Junior (Graham Airth) was playing sax.

We also played virtually every week at Norman’s club “The Wanderers” in Harrogate. I vividly (?) remember it being so hot that people were dancing in the light shower that was dripping through the ceiling that was later found to be the overflow from the gent’s urinal which was blocked with someone’s vomit.

I remember Chumbas playing there too. Harry Hamer was our drummer around then. Julian Walker joined, he actually knew where some notes were on the guitar. Sarah Morrell played trumpet. Time went on, Graham and Phil Midd started “The Wanderers” and the Julian, Geoff, Sarah wing became “Indiscriminate Hoax Fund”

Because Geoff ended up with infinite free access to studio-time we made a lot of recordings under various names using people fished from the ne’er-do-well ocean. 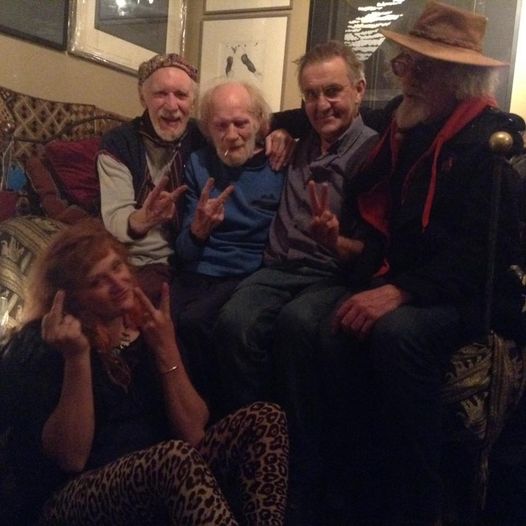